At NRocks, we strive to deliver exceptional customer service and expertise while you enjoy the exhilarating experiences we offer. But don’t take our word for it… 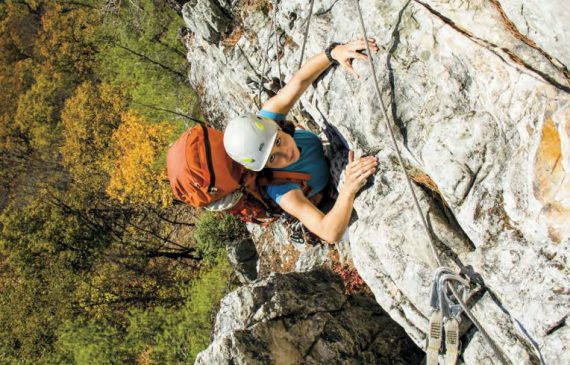 Picture it. You’re standing on a suspension bridge strung 150 feet off the ground between two razorback edges of a rock formation high in the mountains of Pendleton County. You see treetops swaying beneath you with each shaky step. Click HERE for the Full Story! 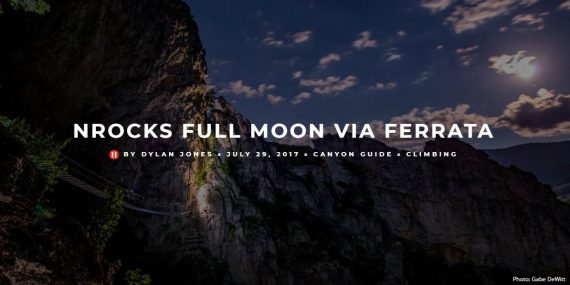 Many species sync certain behaviors with the full moon. From urinating badgers and mating corals to glowing scorpions and the wild behaviors of our own pets, the full moon can cause things to get a bit… whacky. Throughout history, humans have also congregated in bizarre parties of various natures to take advantage of the mega nightlight in the sky. We recently discovered such a place, tucked away in a craggy canyon in West Virginia’s Potomac Highlands. For three nights during every full moon, the energetic guides of NROCKS help adventures with a starry-eyed dose of lunacy traverse the massive rock fins of Nelson Rocks along the legendary NROCKS Via Ferrata. Click HERE for the Full Story! 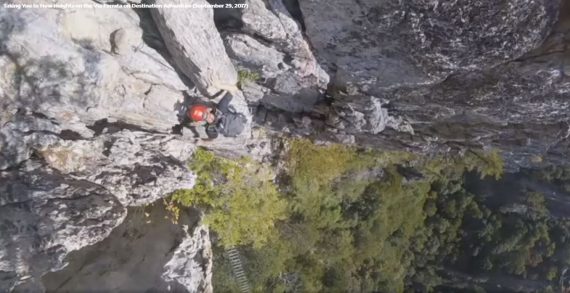 Destination Adventure – Taking You to New Heights on the Via Ferrata
By: Clay Abney

PENDLETON COUNTY, WV (WOWK) – On this week’s Destination Adventure, I went to Nelson Rocks (NROCKS) in Pendleton County to give you a bird’s eye view of one of the most beautiful places in West Virginia and I’m using an iron road to do it. Click HERE for the Full Story and Video! 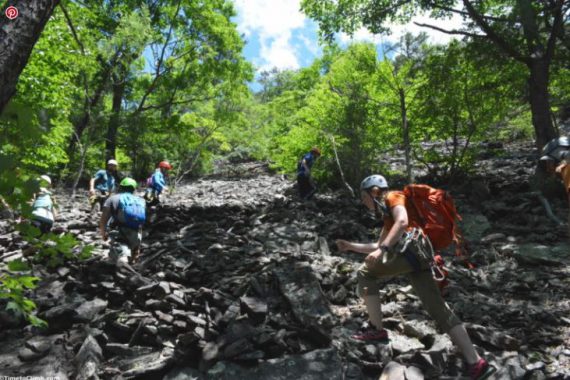 Time to Climb – Climbing the Via Ferrata at Nelson Rocks

Rising over 800 ft above the valley floor, these unique dual razorback ridgelines are a feature many come to Nelson Rocks, West Virginia to experience first hand!
Nelson Rocks, in the North Fork Valley of West Virginia, is located just 10 miles south of the famous trad climbing area of Seneca Rocks. This unique rock formation is comprised of two razorback “Fin” ridgelines of Tuscarora Quartzite rock. Climbing at Nelson Rocks can date as far back as the rock climbing found at Seneca Rocks. During World War II, the 10th Mountain Division of the United States Army trained & climbed on these very rock formations in preparation for their assaults of the mountains of Italy. Click HERE for the Full Story! 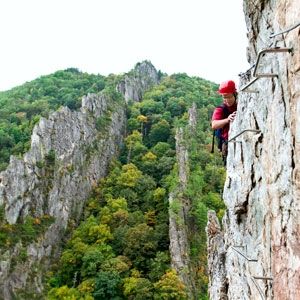 Popular Mechanic – Rock Climbing the Iron Way: Via Ferrata Comes to the USA
By: Jim Gorman

CLICK, CLACK. CLICK, CLACK. The clatter of aluminum carabiners clipping and unclipping fills the air on this late summer afternoon. Pendulous clouds drape the upper slopes of Spruce Knob, the highest peak in West Virginia, and threaten rain. At the moment, though, only a fine mist penetrates a canopy of oak and locust at the base of Nelson Rocks, where guide Josh Armstrong and I watch nine climbers, led by guide Jason Cain, scale a 100-foot-high quartzite cliff on ladder-like rungs anchored in the rock. Each climber wears a harness with a pair of carabiners on lanyards clipped to a steel safety cable that runs alongside the rungs. At 6-foot intervals, when a climber reaches one of the eyebolts that anchor the cable to the cliff, he or she detaches one carabiner from the cable, clips it back on the cable above the bolt, and then does likewise with the trailing carabiner. Click. Clack. Click HERE for the Full Story! 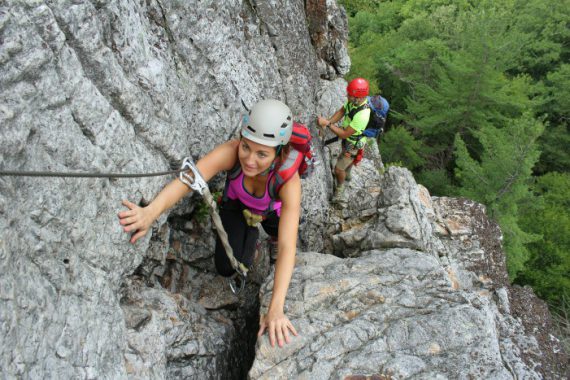 Spectacular rock formations run abound in the North Fork Valley of Pendleton County, WV. Nelson Rocks is one of the more prominent rock formations with superb opportunities for rock climbing and zib lining. It’s comparable to the iconic Seneca Rocks National Recreation Area. Nelson Rocks, however, is operated by NROCKS as a privately owned outdoor adventure center. Click HERE for the Full Story! 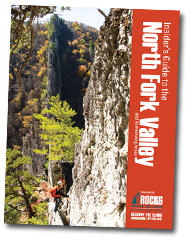 Join the NROCKS family and receive our free Insider's Guide to the North Fork Valley, packed with useful information about the region. While you're at it, sign-up for our e-mail newsletter and be the first to learn about new events and promotions at NROCKS Outdoor Adventures